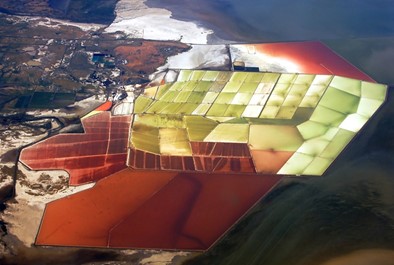 Shallow coasts of oceans and land-locked salty lakes have for millennia been dammed to form shallow lagoons that can be flooded to fill with water and then shut off from the sea so the water will evaporate to leave behind a white layer of salt. Historically, the purpose is simply to harvest the salt.  There are similar shallow lagoons that could be converted to this use but are not so used because it is not cost-effective for producing commercially valuable salt. These lagoons are typically left full of shallow water or dark mud.  Dark lagoons that are not used to produce salt could be converted to highly reflective white surfaces at modest cost.

Lakes and lagoons that are salty and drying up can be managed to ensure the exposed beds are covered with highly reflective salt instead of dark mud.  With controlled spraying of salty water from the lake, it may be possible to ensure the top layer is a white crust that will not blow as dust.  Thousands of square kilometers could be so converted around the Salton Sea in California and Lake Poopó in Bolivia.  In some places, the costs maybe low enough and the gain in reflected watts high enough to be certainly cost-effective with no adverse effects.

In Australia, rising levels of salty groundwater pose a problem for farmers.  By pumping groundwater into shallow evaporation ponds, crops are protected, with a positive side benefit of increased reflectivity (Edmonds and Smith 2011).